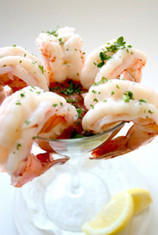 The original concept for the Jonsson shrimp peeling system was developed by Gregor Jonsson in 1938. Gregor owned a retail fish market in Highland Park, IL and to maintain the highest quality, he filleted fish himself and did all his own preparation. His motto, after all, was “Nothing but the best.” As he was peeling shrimp one day, his wife quipped that there should be a machine available that peels shrimp. After a few moments, Gregor responded “It would be easy!” He grabbed a paperclip that held the shrimp, used a pair of scissors to cut the shell, and then pulled the meat out with an ice pick.

Since he was not an engineer, Gregor had no preconceived idea of how such a machine might be built. However, as a fish expert, he was already familiar with shrimp and he knew the machine would have to handle each shrimp carefully to avoid damage. He studied shrimp: the way the shell was formed, the way shrimp are curved, and the normal size variations. He designed his machine around the shrimp itself, using the same concept he illustrated for his wife. In 1953, Gregor Jonsson and Frank Heurich, together, built the first machine in Jonsson’s home. They riveted parts together on his kitchen counter and assembled the first batch of machines on the rug in his living room.

After the first systems were built and tested, the company was formed. Gregor Jonsson Inc. has thrived for 60 years supplying the world with shrimp peeling systems. While the basic concept hasn’t changed in 60 years, we are continually improving upon the performance and capabilities of the equipment.

Gregor Jonsson Inc. remains a family owned and operated business, located in a suburb north of Chicago. Our engineering staff concentrates on perfecting performance, simplifying maintenance, and bringing new products to market. Parts are made using precision automatic machines, and all assembly operations are performed on-site to ensure the highest quality possible. We are committed to our customers and their success, because without them, we wouldn’t be here.

Frank Heurich helped Mr. Gregor Jonsson create the company Gregor Jonsson Inc. in 1955 and was subsequently named president and now Chairman. He has been active in all aspects of the business and has traveled extensively in that capacity. He received his BS from the University of Illinois and an MBA from the University of Chicago. Frank was invited to make a presentation at the Shrimp 92 conference in Hong Kong and has been quoted in numerous trade and business publications.
heurich@jonsson.com

Beth Dancy, President, has worked at Gregor Jonsson since 1983. First employed as an assembly technician, she has risen through the ranks to her current position. Her background in assembly gave her the knowledge required to service the machines all over the world, and she quickly became Service Manager. Looking for more challenges, she effortlessly tackled Sales, and now she is focused on marketing, Human Resources and company management. Outside of the office Beth volunteers extensively in her community and at her church.
bdancy@jonsson.com

Mike Dancy, Vice President of Development and Engineering, began his career at Gregor Jonsson Inc in 1986. Over the years he has consistently demonstrated a strong problem solving ability and a commitment to our customer’s success. He has travelled extensively in Asia, South America, Saudi Arabia as well as throughout the United States training and helping our customers. Mike is active in product development and his creative ideas have led to many innovations in our machines and he has been awarded several patents.
mdancy@jonsson.com

Scott Heurich is the Vice President of Operations. He has worked at Gregor Jonsson Inc since 1993 and therefore has years of manufacturing experience. Scott utilizes his extensive experience to manufacture the highest quality product possible, and is continually implementing innovative solutions that ensure a safe, efficient, and effective manufacturing process.
sheurich@jonsson.com

Matthew Lyon is the Service Manager and joined Gregor Jonsson Inc in 2016.  Matthew’s field technician experience, combined with his background in culinary arts, lends well to our unique industry.  He regularly travels throughout the US working with our customers and instructing users on preventative maintenace and use of the equipment.  He is part of a dedicated team of technicians who work hard to support our customers.  Matthew and his incredible wife have two amazing sons.  When not at work, he’s likely at an ice rink watching his older son’s hockey team or assisting with his younger son’s scouting activities.  mlyon@jonsson.com